We use cookies to ensure that we provide you with the best possible experience on our website. More information on the cookies we set can be found in our privacy notice.
I'm okay with this
Home » About us » Our developments » Groundbreaking developments

We are very proud of all our schemes that we develop for the communities of north and east London. This section highlights just a small number of our previous developments and major regeneration projects. 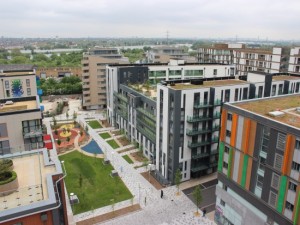 Hale Village contains 542 new affordable homes in four distinct areas as well as our Group Headquarters. These include 185 available for Shared Ownership in a mix of one, two and three bedroom apartments, as well as homes for intermediate and social rent. The wider development includes a number of retail units, a kidney and diabetes centre, a community centre and student accommodation.

The design of Hale Village was inspired by the world acclaimed redevelopment of Hammarby, a waterside district in Stockholm, Sweden. 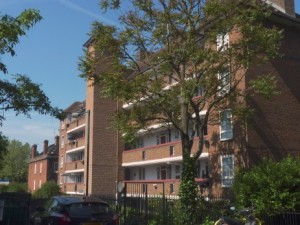 The Barnsbury Estate was our first stock transfer and our management of this Islington estate is notable for two main reasons: First, we completed a five year, £20m refurbishment scheme a whole year ahead of schedule. And second, our involvement in the estate has benefited from a very close partnership with the residents.

Consisting of 646 homes, the 1930s built estate had suffered from several years of neglect. Then, in 1999, an overwhelming 82 per cent of residents voted for the estate to be transferred to Newlon. This ballot followed a period of extensive consultation, in which a schedule of works was agreed and prioritised.

The refurbishment programme, including replacement kitchens and bathrooms, road resurfacing, the creation of private gardens, new balconies and new security systems, was carried out in partnership with Lovell and MDA.

The Barnsbury Estate is an example of how transfers can work with strong partnership and resident involvement. 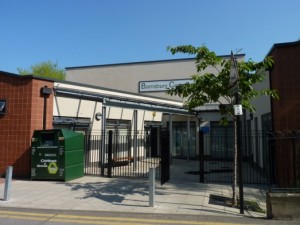 In November 2009 work was completed on the new community centre on the estate for the residents and wider local community to enjoy.

The community centre replaces the old Grimaldi Hall and after consultation with residents it was decided that the centre should be a one stop shop for all estate based enquiries and contain a multi-purpose hall providing modern facilities for residents and community groups.

Our Community Services team runs a wide range of activities and services from the centre.

The new hall is a modern, light-filled community resource comprising a large hall, a smaller hall, office accommodation, interview rooms, a seminar room, toilets and baby changing facilities, a kitchen, a reception area and a courtyard.

Horseferry Road was our first Shared Ownership scheme, which we built in 1992.

Improvements were also made to the surrounding area. A neglected communal space at the scheme was renovated by laying cobble-stones and cutting down some trees to make it a more desirable space for residents and provide a better environment. 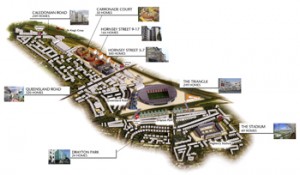 One of the largest redevelopment projects of recent times, the Arsenal Regeneration Programme provided around 1,500 new affordable homes in an area stretching from Highbury in the east to Caledonian Road in the west.

Uniquely for a scheme of this size in inner London, more than 50% of the new homes which were built were affordable and provided by us. 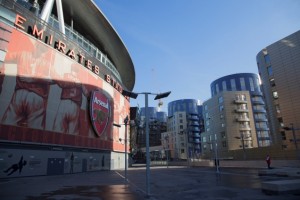 Located next to Emirates Stadium, Queensland Road provides over 700 new homes, with 352 affordable and managed by us. The large number of affordable homes at Queensland Road makes it the biggest single development project in the Arsenal Regeneration Area and is a fitting finale to this amazing project.

Like the rest of the area Queensland Road is more than just housing. The development is the home of the new Arsenal Sports Centre that is a venue for the Club’s educational and social inclusion community programmes, as well as for local residents. 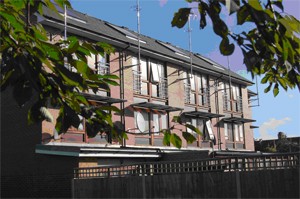 Moira Close in Haringey is the location of 12 of our energy saving homes. They each contain green features which help reduce fuel use and carbon dioxide emissions.

These include conservatories, triple-glazed timber windows, solar shading, solar panels and condensing gas fired boilers, all in an effort to reduce the homes’ impact on the environment.

Efficient condensing gas boilers are also used at the properties. These are controlled by a thermostat and have a seasonal efficiency of over 90%.

During the summer months, the solar panels situated on the south facing roof use the sun’s warmth to provide the majority of the hot water needs of the houses. Throughout the rest of the year the panels provide approximately 40% of the hot water requirements, the rest being provided by the boiler.

Two of the homes at Moira Close have unheated south sided conservatories to act as a buffer space to prevent heat loss. These also feature solar shading to ensure they do not overheat during the summer months, so the floor space can be constantly used as another room. 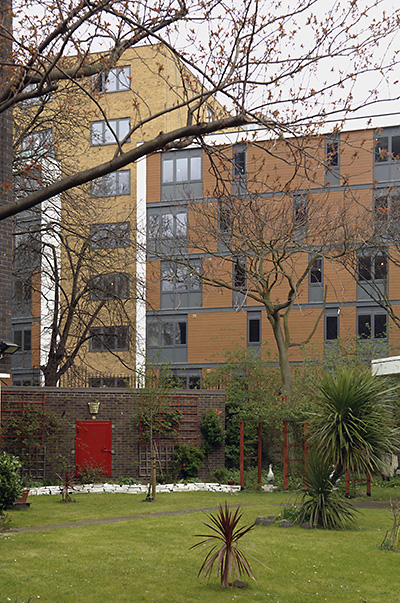 We worked with the Royal Free Hampstead NHS Trust, London Borough of Camden, and developers United House, to build new accommodation and refurbish two existing blocks of housing for the hospital’s staff.

The work at Royal Free Hospital started with the refurbishment of Queen Mary’s House, which was completed in 2006. This involved upgrading 50 apartments and communal areas in this accommodation block, sited to the north of the hospital’s main campus.

The next stage was the major demolition project of William Gunn House, which was developed into a brand new building for hospital staff, called Coppetts Wood House.

It consists of 141 units, including one and two bedroom apartments, as well as studio flats for single occupancy. The 10 floors of the building provide double the amount of accommodation that was available at William Gunn House, helping to keep the staff from the hospital within the community in which they work.

As well as creating new and affordable housing we also wanted to help the environment at this development. To achieve this we installed a ‘green roof’ at Coppetts Wood House. This means that the roof area of the building is covered with vegetation and soil which helps to retain heat and attract birdlife.

It was officially opened on 20th October 2008 by HRH The Duke of York, Patron of the Royal Free NHS Trust.

The last stage of development was the refurbishment of Anne Bryans House, a building which had gone into disrepair. In partnership with United House we transformed the 1960s concrete clad tower to provide good quality housing for more than 180 hospital employees. 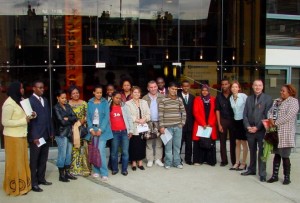 Our project at Northumberland Park in Haringey is unique as we did not build any housing. Instead we developed a Neighbourhood Resource Centre (NRC) to make innovative use of redundant buildings to benefit the community.

The centre at Rothbury Walk serves as an invaluable resource for local residents who were living in an area of multiple deprivation. It offers a wide range of services for the local residents including employment skills and training, legal advice and health services.

We are very proud of this scheme as it benefits the community and this has been proven by the awards that it has won. In 2005 it was a winner at the Haringey Design Awards and it was also a shortlisted finalist in the Deputy Prime Minister’s Sustainable Communities Awards. 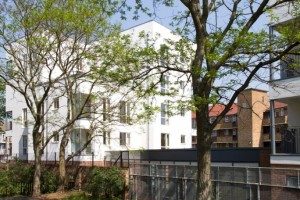 Working in partnership with Outward and Hackney Council, this extra care home at Mount Pleasant, in Hackney, consists of 40 units. Built on the site of an older, smaller residential care scheme for the elderly, the development boasts a number of facilities. These include a front of house café managed for the local elderly community by Age Concern, a small in-house shop where residents can stock up on essentials, and a treatment room for occupational therapy.

The scheme has a south-facing sun terrace on the third floor with great views over the River Lea towards the City and the Olympic Park. There are also photo-voltaic panels on the roof to provide solar power to the building.

Century Court was the only scheme in London to be successful in getting a special one-off pot of Department of Health funding for providing extra care accommodation. We believe this state of the art development provides residents with the level of care they need, as well as being a community hub to support many other older people in the neighbourhood. 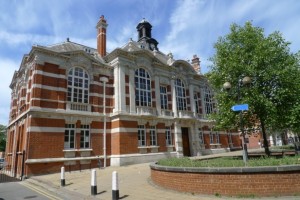 In March 2011 we unveiled the completed renovations at Tottenham Town Hall, which brought a landmark Edwardian building back to the heart of Tottenham.

In partnership with United House and architects, bptw partnership, we lovingly restored this Grade II listed building – possibly the first time a housing association has been responsible for renovations of this kind.

The restorations were showcased at an event attended by Cllr Claire Kober, then Leader of Haringey Council, and David Lammy, MP for Tottenham.

The works to the hall included installing a wheelchair ramp and full lift access without damaging the character of the building, and tasks as delicate as replacing tiny terrazzo mosaic floor tiles and restoring the magnificent Moselle Room.

Lee Valley Estates is managing the legacy of the hall. 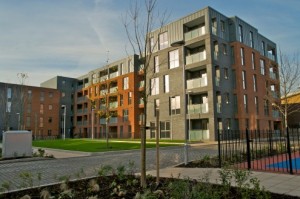 Isobel Place sits on the site of a derelict former depot behind Tottenham Town Hall in Haringey, by the Bernie Grant Arts Centre and close to Seven Sisters underground station.

In total there are 109 properties of varying sizes – 41 for General Needs rent, and 68 Shared Ownership. 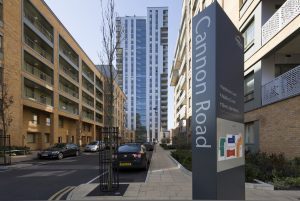 At Cannon Road we have developed 222 new homes, including 100 Shared Ownership flats in a 22 storey tower block called Rivers Apartments, and 122 lower rise properties for rent.

It is based on the site of the old Cannon Rubber factory close to White Hart Lane and is part of the wider regeneration area around Tottenham Hotspur Stadium.

The site provided a new home for the Hartsbrook School, which was previously based in temporary premises at Tottenham Green.

Records show that in the 13th Century the site was known as Mocking Manor. 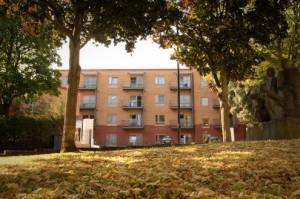 Gospel Oak Court is an extra care scheme for older people which was designed and built by Camden Council in partnership with Shaw Care Homes. The development contains 35 flats.

Residents living there have a tenancy agreement with Newlon’s care and support partner, Outward. Every resident is designated a staff member from Outward who are on site regularly to help them deal with any issues they may have.

All the flats have their own front door, a living area as well as fully equipped modern kitchens and bathrooms. The flats are also accessible for wheelchair users.

Communal facilities on site include a cafe, seating areas, a scooter store and a woodland garden.