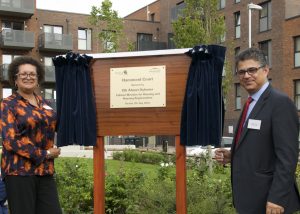 Developed by Newlon Housing Trust, Hammond Court is a landmark new development of 81 affordable homes adjacent to the North Middlesex Hospital in Edmonton, built on the site of the hospital’s former boiler house.

The ceremony was attended by residents as well as local councillors and a range of guests who worked on the construction of the site.

The development includes a mix of affordable rented and Shared Ownership homes, including flats, houses and maisonettes. It features green communal courtyard spaces and landscaped areas for residents.

Councillor Oykener unveiled a plaque to declare the scheme formally open. He also gave a short speech to thank Newlon for their commitment to developing new affordable homes for local residents and the developers, United Living, for providing a number of apprenticeships for local young people during the construction phase of the project.

Sarah Ebanja, Newlon’s Chair, thanked Councillor Oykener for his support for the scheme and explained that all the affordable rented homes and the vast majority of the Shared Ownership properties went to Enfield residents, including some staff working at the North Middlesex Hospital.