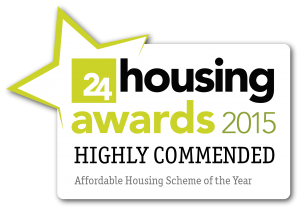 At this year’s 24housing awards we were highly commended in the Affordable Housing Scheme of the Year for Cannon Road in Haringey.

The ceremony took place on 8th October in Coventry. We were up against tough competition and so were pleased to be recognised for our efforts.

At Cannon Road we have developed 222 new homes, including 100 Shared Ownership flats in a 22 storey tower block and 122 lower rise properties for rent.

It is based on the site of the old Cannon Rubber factory close to White Hart Lane and is part of the proposed wider regeneration area around Spurs’ new stadium.

The site also provides a new home for the Hartsbrook School, which was formerly based in temporary premises at Tottenham Green.